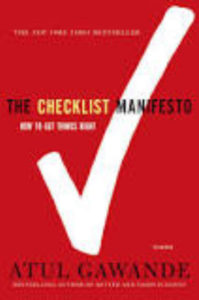 No doubt about it, we live in a complex world. Every year, we build complex systems on top of previous complex systems. And the best part– we never make a mistake or miss any details…right? We know that the second statement is definitely not true. As smart as we think we are, we ALL make mistakes. In my experience, the more details we have to manage (in our heads) the more likely we are to forget something. Even something as simple as starting a new project can lead to all sorts of headaches, such as missed details, false assumptions, and miscommunications.

I recently read a book called, The Checklist Manifesto, by Atul Gawande. The author explains through stories and anecdotes how following checklists lead to more efficient work performed by employees and how the lack of checklists leads to mistakes. The author also gets into detail about what makes a good and bad checklist. I highly recommend adding it to your reading list.

According to Gawande, the professional use of checklists has a notable beginning. In 1935, two crew members died, including the pilot, during a flight test of Boeing’s Model 299 – the “Flying Fortress.” After the crash, many called the plane, “too much plane for one man to fly.” A group of test pilots that believed the plane was still flyable devised a simple solution – a pilot’s checklist. Pilots were trying to figure out how to fly increasingly larger planes with ever more complex machinery. More training would only go so far – military pilots were already highly trained. The group that designed the checklist understood this. Fast forward to today, and you’ll find easy evidence of the checklist’s success. In fact, one of the major stumbling blocks to airline mergers is the checklists – pilots argue over which company’s lists will be used.

Doctors, on the other hand, don’t have their own lives at stake and don’t embrace this concept so readily. Medical schools routinely require memorization, the author states. This has led to a culture of superiority when it comes to something as simple as a checklist. This can have disastrous consequences. As a case in point, studies show that most doctors, nurses and other medical personnel do not wash their hands without some sort of reminder. Studies have shown that as few as 23% of providers take the time to wash their hands before they touch a patient. Germs are spread everywhere, as a doctor goes from patient to patient.

Recently, however, many medical institutions have put washing hands by medical personnel on a checklist that must be signed before each patient interaction. What’s more, a checklist has been developed that explains exactly how one should wash their hands:

As a result of the checklist, infections in these locations have dropped significantly. I know this sounds so simple, but even the smartest people need a checklist.

What is a good checklist?

Honestly, this was my favorite part of the book, because it rang so true in my experience. Gawande states it beautifully, “a checklist cannot fly a plane.” When checklists are built, we often try to do too much with them. If a checklist is too complicated, people won’t use it. And the people reading the checklist are usually trained, so don’t insult them with an over-arching novel for a checklist. Below is a summary that outlines good and bad checklists:

Keep in mind that the effectiveness of checklists is limited. Build checklists with the goal not to eliminate training, but to activate training. This is most important when your people are under stress or doing something that involves adapting to circumstances. Examples include:

Ultimately (and probably best), a checklist is an “act of humility,” as Gawande states. Your people may snub their noses at first but keep at it. Show them how the checklists are improving results. When you’re building checklists, use them to get the “dumb stuff” out of the way…those basic, but critical tasks that are easily overlooked. This will allow your team to focus on the most complex task in front of them – flying the plane together, as a team (whatever your “plane” maybe.)

Rocket Fuel by Gino Wickman and Mark Winters does a deep dive into two roles in a business: Visionary and Integrator. This powerful combination…